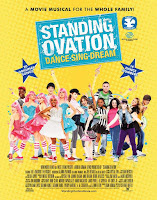 There needs to be a name for the genre of films that seem like Disney Channel Original movies but aren't. Popstar was the last movie we saw like this and, honestly, this kind of movie is actually a win, far more than actual DCOM since those actually have some standards. This time we have Standing Ovation, a movie that combines the inappropriateness of Popstar with the absolutely nonsense of something like Deadly Lessons. It was a ride.

On paper, this film is pretty basic. It's about a quintet of preteens call The Ovations who are trying to win a singing competition against their rivals, The Wiggies, a quintet of high school seniors or something who look 23 and are all the adopted daughters (or sugar babies?) of a rich wig manufacturer. There's also an annoying "little sister" character who is no one's sister but is trying to join both groups and her voice is like nails on a chalkboard. The main girl of The Ovations, Brittany, is struggling with trying to keep her Irish grandfather from gambling away what little money they have while her songwriter brother is off giving his songs away to The Wiggies. Brittany meets a girl named Joey who definitely has mafia connections and agrees to be her manager. She's also 12 by the way. Joey has her own mission to get revenge on the man who robbed her family, leading to her father's early death. Again. she is 12. I honestly hesitate to say much more about the plot because part of what makes this movie so off the wall is how many times it genuinely surprises you, often with Joey. It's kind of like if Step Up was combined with a bad neo-noir. It's also a musical and while the dancing is fine and the production of the music is pretty okay generic pop, the lyrics of some of these songs are just pathetic or curious. The boy groups sings a song about how Beyonce, Britney, Rhianna, and Whitney all want them in their dreams but they're saving themselves for you, girl. Oh, and the wigs are bad but The Wiggies all wear pretty cute 50s throwback clothes to make up for it.

This movie genuinely shocked us with a lot of moments while still having the most predictable last 15 minutes ever. Adam might have hit the nail on the head with the assessment that the movie feels a bit like it was written to have adult characters initially but then they changed it to kids for marketing purposes. Or the writer is secretly a bit inappropriately fascinated by little girls, if you get what I'm saying. But hey, the writing is bad (fat jokes and gross out humor: why), the camera work is occasionally hilarious, and it's full of cringe or WTF. I wouldn't really want to watch it again myself, but I definitely would to watch someone else's reaction. Give it a go.

Every Monday night, Adam, Kay, Sarah, and Erik watch classics of poor cinema and talk about it.